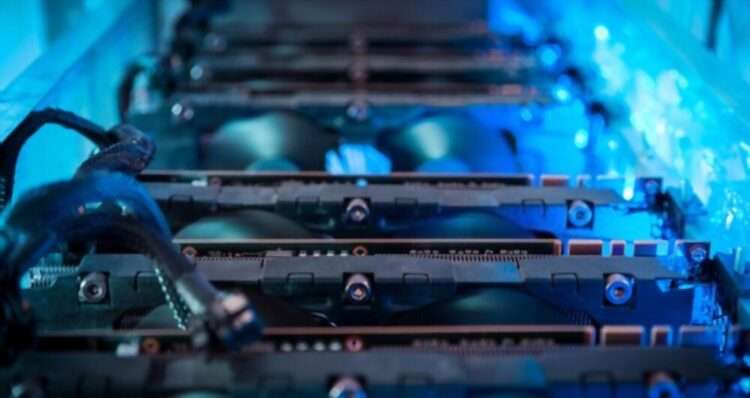 Now there are a lot of graphics cards in the market that is considered ideal for mining cryptocurrencies. So, we have curated a list of the top-ranking GPUs for mining crypto along with the reasons to buy them.

List of the Top-Ranking Graphics Card For Mining Any Cryptocurrency

Here are some of most of the effective GPUs to consider:

MSI GeForce RTX 2070 – The Most Effective GPU for Miners

If you are into Ethereum mining then you already know that mining ETH needs a lot of memory bandwidth. And this is where the RTX 20 Series GPUs serve the best. With a Hash Rate of 44MH/s, the RTX 2070 is the second cheapest card after the RTX 2060.

The MSI RTX 2070 comes with a core clock speed of 1620 MHz and 448.0 GB/s memory bandwidth for faster mining. The Zero Frozr technology and dual fans work effortlessly to lower the temperature of the chip throughout the mining process.

If you are into ETH mining, then the RTX 2070 may earn you over $80 per month using the Ethash algorithm. Even though the power consumption of this graphics card at peak load cannot be considered optimal, the higher hash rate can cover your mining expenses without any problem.

The Nvidia GTX 1660 TI and Super both are decent choices to set up in a budget-friendly mining build. Even on a lower price point, the GTX 1660 packs a higher clock speed and a modest Hash Rate of 25 MH/s, enough to mine famous meme coins.

The older GTX 1600 Series GPUs sit on the second spot on our list. You can go between GTX 1660 Ti or Super and expect the same similar performance in mining. It is because both of them can let you touch up to 25 MH/s despite one of them having slightly higher specs than the other.

The GTX 1660 Ti and Super both are the least expensive GPUs to consider for crypto mining. Also, the GTX 1600 series cards consume less power to save your mining expenses.

For example, if you are planning to mine Ethereum at a hash rate of 25 MH/s, the GTX 1600 cards would only consume around 75 watts of power.

You can earn over $2 daily if you use GTX 1600 graphics cards in your mining rig. The prices of GTX 1600 series cards are fluctuating constantly on Amazon & eBay. It’s worth buying five or six GTX 1600 GPUs when the prices are at the lowest.

The RTX 3080 Ti is just as fast as the RTX 3090. Even at a higher price tag, it packs great value in cryptocurrency mining. It’s the most preferable GPU for mining bitcoin and Ethereum with a hash rate of 57 MH/s.

First of all, it’s hard to find an RTX 3080 Ti, and if you manage to find one, you can easily break the 50 MH/s in mining. No doubt, the Ampere Architecture graphics cards hold more power when it comes to mining famous cryptocurrencies like Bitcoin & Ethereum.

Some benchmarks over the internet revealed that The RTX 3080 Ti even manages to touch 75 MH/s in Dagger Hashimoto Alogarithm. With the RTX 3080, Ti comes the power to overclock up to 1710 MHz. And if you manage to reach that speed, you can scale your crypto mining operation over 90 MH/s.

If we compare that with RTX 2070 and GTX 1660 Ti, the RTX 3080 Ti packs double the amount of power in crypto mining. However, even if you don’t overclock this GPU, it still shows great performance at 1410 MHz base clock speed. And this is because it has a higher memory bandwidth of 760.3 GB/s, which is a great factor to consider if you are an Ethereum miner.

The EVGA RTX 3080 Ti comes with three powerful fans for ideal cooling. Even if you overclock the GPU, you can hardly hear any noise. Thanks to the 9 iCX3 thermal sensors and fans for keeping the chip cool and silent even at peak loads.

The only thing that you need to keep in mind is the power. The RTX 3080 Ti consumes more power if you don’t overclock it. So make sure you have an efficient power supply to meet the power needs of this GPU.

Keeping in view the expected 85 MH/s hash rate, you can expect the RTX 3080 Ti to earn over $150 using the Ethash algorithm. Yes, it could be more if you go after smaller meme coins that require a lower hash rate.

The RTX 2070 delivers exceptional value and is ranked among the list of top graphics cards in the world for cryptocurrency mining. It’s one of the cost-effective graphics cards to solve the complex equations of the crypto world.

Also, there isn’t a huge difference in the prices of RTX 2070 Super and the normal RTX 2070. Spending a few more dollars will buy you a GPU that can mine at 37 MH/s, a little bit more than that of a normal RTX 2070.

Using the Ethash algorithm, you can earn around $90 a month if you are into Ethereum mining.

No doubt, the RTX 3090 is one of the fastest mining GPUs in the industry right now. It’s one of the top-ranking Nvidia Ampere GPUs that has no parallel in reaching the higher hash rates. Yes, it’s about breaking over 100 MH/s.

No matter if you are mining Litecoin or Bitcoin, you can expect high returns if you have an RTX 3090 installed in your mining rig. This beast has no parallel, even the most advanced AMD cards are a not match to Nvidia’s flagship GPU, the RTX 3090.

The shortage of RTX 3090 has significantly proved its importance in the world of cryptocurrency mining. Also, the inflated prices have kept this GPU out of the range of right budget miners. And still, it’s way out of the reach of many miners due to its limited availability in the stock.

Technically, it’s a graphics card meant for delivering ideal performance in gaming. However, the higher hash rate (103 MH/s) has made this graphics card stick at the top of the GPU mining checklist.

The RTX 3090 is no doubt a powerful graphics card with 24GB GDDRX memory and a high memory bandwidth of 936.2 GB/s. It holds around 10,496 CUDA cores to solve the most complex equations in a shorter time.

This graphics card manages to make over $200 per month using the Ethash algorithm. But it consumes a lot of power which might increase your power expense. Unless you have a budget to add multiple RTX 3090 graphics cards in your mining rig, we suggest you stay away from it if you are a low-budget miner.

Moreover, we have chosen the graphics cards that consume less power and go for higher hash rates. In Europe, the costs for electricity are around 0.07 cents per kWh which are relatively less than that of the United States. The table below shows the break-even period (time to recover the actual cost) of each graphics card on the list.

Before making any purchase, here are crucial facts to look for:

For crypto mining, it’s important to go for a GPU that has 256-bit bus width. Graphics cards with more bus width take less time to compute.

Make sure you choose a graphics card that has more video memory. Especially, if you are into Ethereum mining, we highly recommend you to go for 8GB graphics cards. For mining, smaller cryptocurrencies like Cardano, Monero, Zcash, and Dodge, a 4GB GPU could be enough.

Obviously, you don’t want to end up buying a graphics card that costs you more expenses at the end of the day. Nvidia GPUs are expensive, but they are energy-efficient as compared to AMD GPUs. The AMD cards on other hand as less expensive, but they draw more power. So for mining, AMD isn’t the right unless you are low on budget.

Not every GPU out there is designed for crypto mining. Some older graphics cards consume a lot of power, costing more expenses than profit. So, it is important to keep in mind the TDP rating of a graphics card and the cost of power (kWh) in your area.

So, we hope you have made your mind to choose from the list of top-ranking graphics cards for cryptocurrency mining. Now comes the hard part, and that is to pick the right one from the rest.

To be honest, you should go for the graphics card that you think falls under your budget and needs. We know that the RTX 3090 packs enormous power in mining, but that doesn’t mean that you should spend all your money buying that power-hungry GPU. You have to keep in mind several factors before choosing any one of these cards.

Let’s say if we had to choose from this list, then it would be RTX 2070 Super or an RTX 3080 Ti. The RTX 2070 Super lies on a sweet spot between price and performance. This GPU doesn’t need too much power to run and is perfect for mining Ethereum, Zcash, Monero, Cardano, and many famous cryptocurrencies.

At the end of the month, you are left with a decent earning figure after subtracting the cost of energy. The RTX 3080 Ti however is an expensive choice but consumes less power as compared to RTX 3090. And when it comes to hash rates, this GPU somehow lets you close enough to what an RTX 3090 offers at a higher price.

The choice is all yours, let us know in the comments section if you have any good suggestions.